As summertime approaches here in Europe, so does the peak season across the continent for hail, straight-line winds, and even tornadoes (collectively known as severe convective storms). These storms have been recognized for centuries—in the eighteenth century, Italian composer Antonio Vivaldi wrote a sonnet to accompany his violin concerto Summer from the Four Seasons concerti:

“The shepherd trembles, fearful of a violent storm…
…the heavens roar, and great hailstones beat down” [1]

Northern Italy is one of the most hazard prone regions in Europe for severe convective storms (SCS) and today in the twenty-first century they do not just make shepherds feel apprehensive: SCS cause almost €4 billion in average annual insured losses across the continent.

Nor do these losses only occur from the accumulation of small, attritional events. In July 2013, Storm Andreas brought large hail, strong winds and tornadoes to France, Belgium and Germany, causing around €3.7 billion in insured losses. In June 2014, hailstones of 8-10 centimeters (3.1-3.9 inches) in diameter was reported in France as Storm Ela crossed into Belgium (Figure 1), causing roughly €2.4 billion in insured losses. Managing risk from SCS in Europe is not just important for maintaining healthy combined ratios but, given the continent’s susceptibility to large events, should also be a consideration for capital adequacy and solvency calculations.

One of the big challenges of SCS modeling is that the climatology of a region is smooth (i.e. there is a gradual transition between areas of low and high meteorological SCS risk), but individual events, such as a tornado, are very localized and an event footprint can have very steep gradients. RMS has developed a novel approach to tackle this, which allows locations within the same grid cell to be hit by different hazard intensities. This enables us to account for steep hazard gradients within event footprints while preserving the smoothness of the final model climatology and efficient run times. This does raise a bigger question however, which is, given the frequency of SCS events, why not just use historical data to quantify risk?

The short answer is: we can do better. Historical observations are of great value for understanding SCS risk, but they have limitations. For example, they are incomplete, since they rely on observers to see (and record) hail, straight-line winds or tornadoes. They also reflect changes in observation practices (Figure 2): more people reporting tornadoes is not the same as more tornadoes occurring—this has to be taken into account. Weather stations, which do not suffer the same ‘human bias’, are unfortunately rarely in a dense enough network to capture the full characteristics of SCS phenomena, as was the case during the July 2002 German derecho event (Figure 3).

Historical observations are also too short: decades (or even centuries) of reports do not capture the full distribution of SCS hazard, and claims experience is not long enough to capture the full volatility of losses. Claims histories become more difficult to interpret further back in the past as exposure changes over time. RMS SCS models build upon what we can learn from experience but are able to explicitly address its limitations, allowing for more credible evaluation of SCS risk than using experience alone.

The upcoming RMS Europe Severe Convective Storm HD Models, available on RMS Risk Modeler, provide a pan-European risk management tool, serving multiple use cases from underwriting to portfolio management and capital adequacy. The models cover the full spectrum of sources of SCS loss, from localized tornadoes and hailstorms to large derechos. They include a set of multi-peril events covering 17 countries based on 50,000 years of simulations, giving users insights into the correlation geographically and by sub-peril (i.e. hail, straight-line wind, and tornado risk). The HD framework makes it possible to model hours clauses of varying length and other time-based policy conditions. The models were developed based on the latest scientific research and complement the existing suite of RMS climate peril models for Europe, providing users with a holistic view of climate risk across the domain. 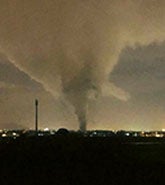 Chris is the product manager for the RMS North America Severe Convective Storm (SCS) and Winterstorm models. He has a doctorate in Climatology from Oxford University, where he was a College Lecturer.

Michèle is now the product manager for the new RMS® Europe Windstorm Models and the Europe Severe Convective Storm HD Models. She holds a master’s degree in Atmospheric and Climate Science from ETH Zurich.