In early December 2015 Storm Desmond hit, bringing an “atmospheric river” to the northwest of England with its headwaters snaking back to the Caribbean. It broke the U.K.’s 24 hour rainfall record, with 341.1mm of rain recorded in Cumbria.

Just three weeks later, while a great anticyclone remained locked in place over central Europe and the atmospheric flows had only shifted south by 150km, Storm Eva arrived. The English counties of Lancashire and Yorkshire were drenched during December 26th, and the media was once more overwhelmed with flood scenes—streets of Victorian-era houses inundated by 30-40cm of slow-moving water.

Journalists soon turned their attention to the failure of flood protections in the affected regions. In one interview in Carlisle, a beleaguered Environment Agency representative commended their defenses for not having failed—even when they had been overtopped. If the defenses had failed, maybe the water would not have ponded for so long.

The call for “resilience”?

The call has gone out worldwide for improved “resilience” against disasters. As outlined by the UN Secretary General’s Climate Resilience Initiative, resilience is defined as the ability to “Anticipate, Absorb and Reshape” or “A2R”.

How did the U.K.’s flood defenses match up to these criteria in December? Well, as for the two “A”s in A2R, the residents of Carlisle did not anticipate any danger, thanks to the £38 million spent on flood defenses since the last time Carlisle had a “1 in 200 year” flood in January 2005 (which hit 1,900 properties). And the only thing the houses of Carlisle were absorbing on the first weekend in December was the flood water seeping deep into their plaster, electricals, and furnishings. As for “reshaping”, beyond the political recriminations, now is the time for some serious thinking about what constitutes resilience in the face of floods.

A flood wall is not the same as resilience. Resilience is about the capacity to recover quickly from difficulties, to bounce back from adversity. Organizations such as the UK’s Environment Agency may be good at building flood defenses, but not so proficient at cultivating resilience.

A flood wall can certainly be part of a culture of resilience—but only when accompanied by regular evacuation drills, a flood warning system, and recognition that despite the flood wall, people still live in a flood zone. Because flood walls effectively remove the lesser more frequent floods, the small risk reminders go away.

A growing reliance on the protection provided by flood walls may even cause people to stop believing that they live in a flood plain at all, and think that the risk has gone to zero, whether this is in New Orleans, Central London or Carlisle.

Even when protected by a flood wall, residents of river flood plains should be incentivized, through grants and reduced insurance rates, to make their houses resistant to water: tiling walls and floors and raising electrical fittings. They should have plans in place—such as being ready to carry their furniture to an upper floor in the event of an alert—as one day, in all probability, their houses will flood.

Given the U.K.’s recent experience we should be asking are people becoming more resilient about their flood risks? It sometimes seems that the more we build flood walls, the less resilient we become. 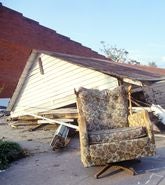