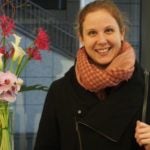 A typical European windstorm season usually spans from October to March, with a peak of activity during the winter months. But with a quiet and sunny February, due to a strong blocking situation in Western Europe, had spring arrived? No, Mother Nature decided differently, and March came with its series of windstorms, and although March is not over yet, let’s look at what has happened so far.

What’s in a Name?

March 2019 started with the formation of a westerly weather pattern that prevailed until March 16-17, and an unstable atmospheric situation that brought a series of eight spring storms passing through Europe in just over two weeks. This series of storms brought damage and disruption across Europe, with uprooted trees, power outages, transport interruptions on road, rail, and in the air, injuries and even fatalities were reported.

Though from the European media, you’d be forgiven in thinking there were many more storms. Naming weather systems to help communicate its associated potential dangers has become general practice for many national meteorological services. But with each agency, from The Free University of Berlin, the U.K. Met Office and Spain’s weather agency, giving names to storms that cross their country, the same storm system can acquire several names as it passes through different countries. The table below leads with the German storm name unless indicated. 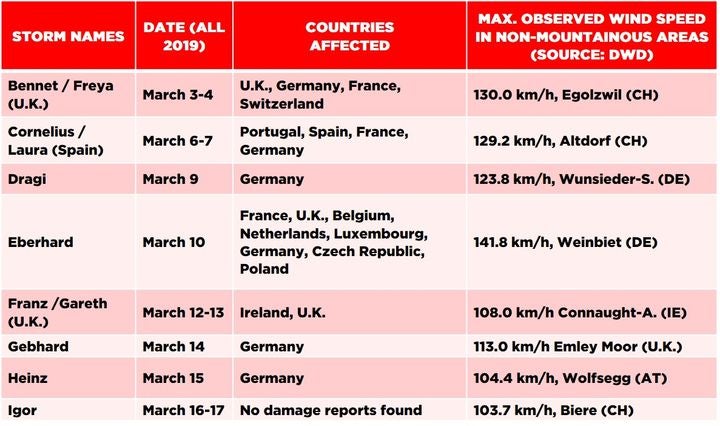 Storm Eberhard had the most widespread impact, with its track extending the furthest south of all the storms seen during the first half of March, according to the German Meteorological Service (DWD). On Sunday, March 10, this area of low pressure crossed northwest Europe bringing severe gusts to parts of the southern U.K., northern France, Belgium, Netherlands, Luxembourg, south-central Germany, Czech Republic, and southern Poland.

Several houses lost roofs or had tiles blown away. Major rail disruptions prevailed for days in Germany and traffic jams extended for hundreds of kilometers in North-Rhine Westphalia and other regions of Germany. Several hundred thousand customers in the Czech Republic and Poland were without power. 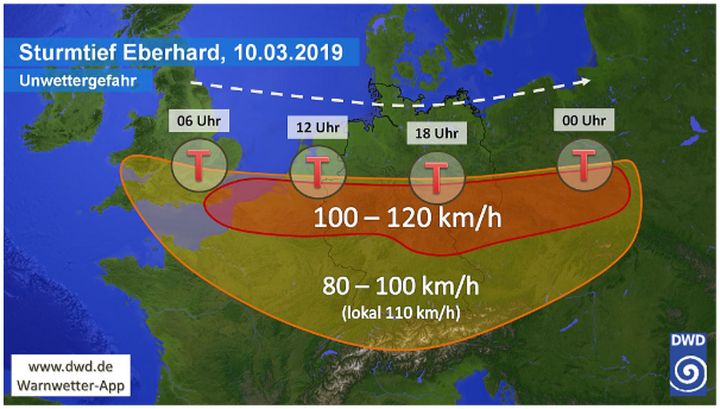 How Bad was Storm Eberhard?

In our early event response client summaries, RMS uses storm and damage information across a wide variety of sources to provide clients with an initial indication of impact as more detailed reports still emerge. In the immediate aftermath of Eberhard, damage information was sparse, limited primarily to tree fall and disruption to rail and airline networks.

As the RMS Event Response team continued to monitor the latest developments in the days that followed, we use a series of thresholds that must be met in order to enact distinct levels of response, which includes modeling tools and insurance industry loss estimates. These thresholds ensure we provide resources for events with the greatest market interest. What was interesting in this specific case, was while recorded wind gusts at many weather stations were significant, this did not appear to immediately translate into physical property damage.

Indeed, this uncertainty is apparent in the several industry loss estimates released days after the storm, which ranged between “significantly less than €500 million” and €800 million. Several days later, a risk modeler issued a loss estimate in excess of this range, extending the uncertainty further.

For RMS, it is important that our response reflects all data sources – especially when the data is conflicting – and not just pure modeling. Our internal work leans towards the lower end of the loss range currently in the market and this falls below our typical threshold of further response. However, we continue to monitor developments and engage with our clients as claims come in to consider improvements to our process.

Were This Year’s March Storms Exceptional?

European windstorms follow a strong seasonality with peak of strongest activity during the winter months – December to February, and lowest activity in the summer. This is due to the initial conditions required for their formation. European windstorms, or extra-tropical cyclones, form in areas where warm air masses from the south meet cold polar air masses, typically in the beginning of the winter, when oceans are still warm but polar air is already cold. Only about 11 percent of European windstorms occur in March, compared to 25 percent and 15 percent in January and February, as shown on this figure below. 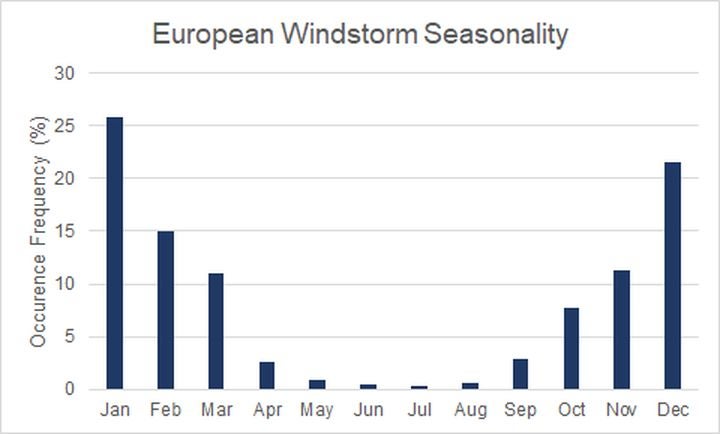 So far, March 2019 brought eight small to medium-size windstorms; which may seem excessive. But these are essentially eight named low pressure systems, and not all of them produced damage, and only two or three of them could be important enough for the insurance industry. This high number of events is unusual but not unprecedented: in 2008, a series of three March windstorms were recorded – Emma, Johanna and Kirsten, with respective losses of about €1.3 billion, €180 million and €245 million each. These losses should be higher than what we are observing in March 2019.

According to the RMS Europe Windstorm Models, there is about a 25 percent chance of having two windstorms in March in Europe (20 percent of three storms). From the loss perspective, March 2019 did not stand out either. We don’t yet know what the final total losses for this series of storms will be, but if we are looking at the lower end of the loss ranges, we see that losses resulting from these March European windstorms having more than 60 percent chance to fall into that bucket.

Looking Back at the Outlook

At the beginning of the season, our colleague and European windstorm expert Stephen Cusack published a forecast summary for the 2018/19 winter season. Seasonal forecasts always come with an amount of uncertainty. The blog article reported that “meteorological indicators point to a less stormy North Atlantic” compared to the previous 2017/18 season. The season is not yet over, but the storm activity until now seems to support this forecast, despite this uptick in the month of March.

Tanja joined RMS in November 2018 and is based at the RMS London office as a modeler at the Event Response team. Tanja previously worked as a postdoctoral researcher at Stockholms Universitet in Sweden where she investigated the processes driving Arctic climate. She holds a PhD in global climate modeling from ETH Zurich.

Tom leads RMS’ Event Response team, responsible for providing real-time guidance and modeling products to RMS clients across a wide breadth of global natural catastrophes. Tom has served RMS clients in a number of roles since joining the organization in 2009, most recently as a Senior Product Manager in the Model Product and Data Management team, focusing on the RMS North Atlantic Hurricane Model suite of products.

He also spent several years in the Client Support Services organization, primarily providing specialist peril model support. Tom joined RMS upon completion of his B.S. and M.S. degrees in meteorology from The Pennsylvania State University and is a member of the American Meteorological Society (AMS).