With California experiencing two of the most devastating seasons on record in consecutive years, EXPOSURE asks whether wildfire now needs to be considered a peak peril 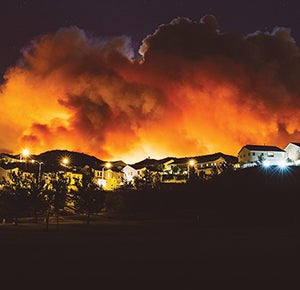 Some of the statistics for the 2018 U.S. wildfire season appear normal. The season was a below-average year for the number of fires reported — 58,083 incidents represented only 84 percent of the 10-year average. The number of acres burned — 8,767,492 acres — was marginally above average at 132 percent.

Two factors, however, made it exceptional. First, for the second consecutive year, the Great Basin experienced intense wildfire activity, with some 2.1 million acres burned — 233 percent of the 10-year average. And second, the fires destroyed 25,790 structures, with California accounting for over 23,600 of the structures destroyed, compared to a 10-year U.S. annual average of 2,701 residences, according to the National Interagency Fire Center.

As of January 28, 2019, reported insured losses for the November 2018 California wildfires, which included the Camp and Woolsey Fires, were at US$11.4 billion, according to the California Department of Insurance. Add to this the insured losses of US$11.79 billion reported in January 2018 for the October and December 2017 California events, and these two consecutive wildfire seasons constitute the most devastating on record for the wildfire-exposed state.

Such colossal losses in consecutive years have sent shockwaves through the (re)insurance industry and are forcing a reassessment of wildfire’s secondary status in the peril hierarchy.

According to Mark Bove, natural catastrophe solutions manager at Munich Reinsurance America, wildfire’s status needs to be elevated in highly exposed areas. “Wildfire should certainly be considered a peak peril in areas such as California and the Intermountain West,” he states, “but not for the nation as a whole.”

His views are echoed by Chris Folkman, senior director of product management at RMS. “Wildfire can no longer be viewed purely as a secondary peril in these exposed territories,” he says. “Six of the top 10 fires for structural destruction have occurred in the last 10 years in the U.S., while seven of the top 10, and 10 of the top 20 most destructive wildfires in California history have occurred since 2015. The industry now needs to achieve a level of maturity with regard to wildfire that is on a par with that of hurricane or flood.”

“Average ember contributions to structure damage and destruction is approximately 15 percent, but in a wind-driven event such as the Tubbs Fire this figure is much higher”

However, he is wary about potential knee-jerk reactions to this hike in wildfire-related losses. “There is a strong parallel between the 2017-18 wildfire seasons and the 2004-05 hurricane seasons in terms of people’s gut instincts. 2004 saw four hurricanes make landfall in Florida, with K-R-W causing massive devastation in 2005. At the time, some pockets of the industry wondered out loud if parts of Florida were uninsurable. Yet the next decade was relatively benign in terms of hurricane activity.

“The key is to adopt a balanced, long-term view,” thinks Folkman. “At RMS, we think that fire severity is here to stay, while the frequency of big events may remain volatile from year-to-year.”

The California losses are forcing (re)insurers to overhaul their approach to wildfire, both at the individual risk and portfolio management levels.

“The 2017 and 2018 California wildfires have forced one of the biggest re-evaluations of a natural peril since Hurricane Andrew in 1992,” believes Bove. “For both California wildfire and Hurricane Andrew, the industry didn’t fully comprehend the potential loss severities. Catastrophe models were relatively new and had not gained market-wide adoption, and many organizations were not systematically monitoring and limiting large accumulation exposure in high-risk areas. As a result, the shocks to the industry were similar.” 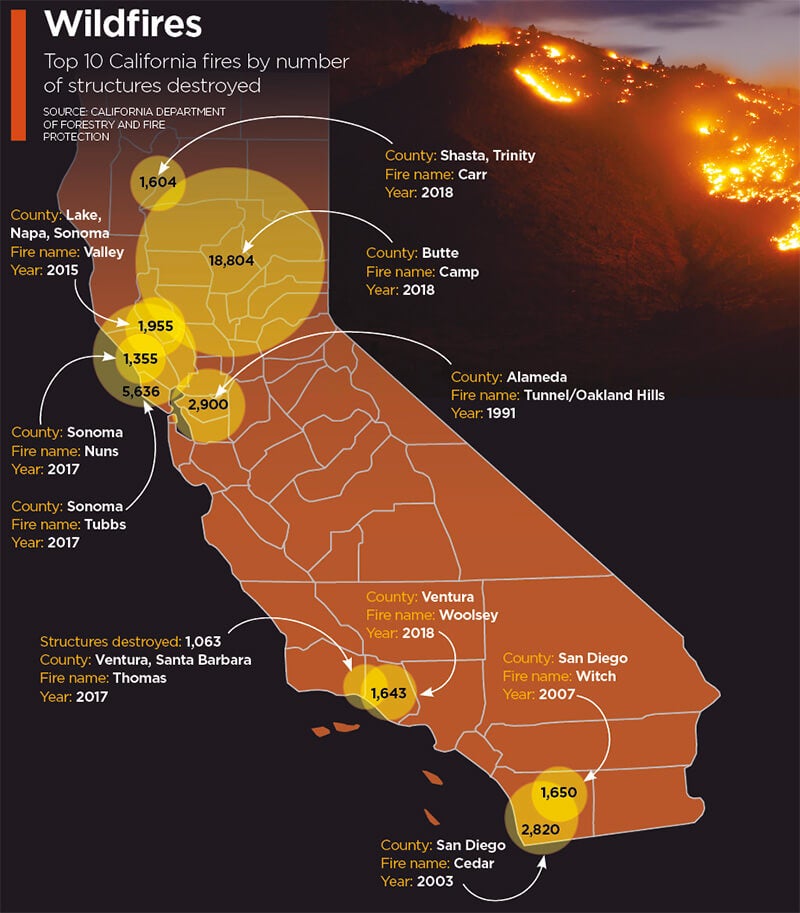 For decades, approaches to underwriting have focused on the wildland-urban interface (WUI), which represents the area where exposure and vegetation meet. However, exposure levels in these areas are increasing sharply. Combined with excessive amounts of burnable vegetation, extended wildfire seasons, and climate-change-driven increases in temperature and extreme weather conditions, these factors are combining to cause a significant hike in exposure potential for the (re)insurance industry.

A recent report published in PNAS entitled “Rapid Growth of the U.S. Wildland-Urban Interface Raises Wildfire Risk” showed that between 1990 and 2010 the new WUI area increased by 72,973 square miles (189,000 square kilometers) — larger than Washington State. The report stated: “Even though the WUI occupies less than one-tenth of the land area of the conterminous United States, 43 percent of all new houses were built there, and 61 percent of all new WUI houses were built in areas that were already in the WUI in 1990 (and remain in the WUI in 2010).”

“The WUI has formed a central component of how wildfire risk has been underwritten,” explains Folkman, “but you cannot simply adopt a black-and-white approach to risk selection based on properties within or outside of the zone. As recent losses, and in particular the 2017 Northern California wildfires, have shown, regions outside of the WUI zone considered low risk can still experience devastating losses.”

For Bove, while focus on the WUI is appropriate, particularly given the Coffey Park disaster during the 2017 Tubbs Fire, there is not enough focus on the intermix areas. This is the area where properties are interspersed with vegetation.

“In some ways, the wildfire risk to intermix communities is worse than that at the interface,” he explains. “In an intermix fire, you have both a wildfire and an urban conflagration impacting the town at the same time, while in interface locations the fire has largely transitioned to an urban fire.

“In an intermix community,” he continues, “the terrain is often more challenging and limits firefighter access to the fire as well as evacuation routes for local residents. Also, many intermix locations are far from large urban centers, limiting the amount of firefighting resources immediately available to start combatting the blaze, and this increases the potential for a fire in high-wind conditions to become a significant threat. Most likely we’ll see more scrutiny and investigation of risk in intermix towns across the nation after the Camp Fire’s decimation of Paradise, California.”

According to Folkman, the need for greater market maturity around wildfire will require a rethink of how the industry currently analyzes the exposure and the tools it uses.

“Historically, the industry has relied primarily upon deterministic tools to quantify U.S. wildfire risk,” he says, “which relate overall frequency and severity of events to the presence of fuel and climate conditions, such as high winds, low moisture and high temperatures.”

While such tools can prove valuable for addressing “typical” wildland fire events, such as the 2017 Thomas Fire in Southern California, their flaws have been exposed by other recent losses.

“Such tools insufficiently address major catastrophic events that occur beyond the WUI into areas of dense exposure,” explains Folkman, “such as the Tubbs Fire in Northern California in 2017. Further, the unprecedented severity of recent wildfire events has exposed the weaknesses in maintaining a historically based deterministic approach.”

While the scale of the 2017-18 losses has focused (re)insurer attention on California, companies must also recognize the scope for potential catastrophic wildfire risk extends beyond the boundaries of the western U.S.

“While the frequency and severity of large, damaging fires is lower outside California,” says Bove, “there are many areas where the risk is far from negligible.” While acknowledging that the broader western U.S. is seeing increased risk due to WUI expansion, he adds: “Many may be surprised that similar wildfire risk exists across most of the southeastern U.S., as well as sections of the northeastern U.S., like in the Pine Barrens of southern New Jersey.”

As well as addressing the geographical gaps in wildfire analysis, Folkman believes the industry must also recognize the data gaps limiting their understanding.

“There are a number of areas that are understated in underwriting practices currently, such as the far-ranging impacts of ember accumulations and their potential to ignite urban conflagrations, as well as vulnerability of particular structures and mitigation measures such as defensible space and fire-resistant roof coverings.”

In generating its US$9 billion to US$13 billion loss estimate for the Camp and Woolsey Fires, RMS used its recently launched North America Wildfire High-Definition (HD) Models to simulate the ignition, fire spread, ember accumulations and smoke dispersion of the fires.

“In assessing the contribution of embers, for example,” Folkman states, “we modeled the accumulation of embers, their wind-driven travel and their contribution to burn hazard both within and beyond the fire perimeter. Average ember contributions to structure damage and destruction is approximately 15 percent, but in a wind-driven event such as the Tubbs Fire this figure is much higher. This was a key factor in the urban conflagration in Coffey Park.”

The model also provides full contiguous U.S. coverage, and includes other model innovations such as ignition and footprint simulations for 50,000 years, flexible occurrence definitions, smoke and evacuation loss across and beyond the fire perimeter, and vulnerability and mitigation measures on which RMS collaborated with the Insurance Institute for Business & Home Safety.

Smoke damage, which leads to loss from evacuation orders and contents replacement, is often overlooked in risk assessments, despite composing a tangible portion of the loss, says Folkman. “These are very high-frequency, medium-sized losses and must be considered. The Woolsey Fire saw 260,000 people evacuated, incurring hotel, meal and transport-related expenses. Add to this smoke damage, which often results in high-value contents replacement, and you have a potential sea of medium-sized claims that can contribute significantly to the overall loss.”

A further data resolution challenge relates to property characteristics. While primary property attribute data is typically well captured, believes Bove, many secondary characteristics key to wildfire are either not captured or not consistently captured.

“This leaves the industry overly reliant on both average model weightings and risk scoring tools. For example, information about defensible spaces, roofing and siding materials, protecting vents and soffits from ember attacks, these are just a few of the additional fields that the industry will need to start capturing to better assess wildfire risk to a property.”

Bove is, however, conscious of the simple fact that “wildfire behavior is extremely complex and non-linear.” He continues: “While visiting Paradise, I saw properties that did everything correct with regard to wildfire mitigation but still burned and risks that did everything wrong and survived. However, mitigation efforts can improve the probability that a structure survives.”

“With more data on historical fires,” Folkman concludes, “more research into mitigation measures and increasing awareness of the risk, wildfire exposure can be addressed and managed. But it requires a team mentality, with all parties — (re)insurers, homeowners, communities, policymakers and land-use planners — all playing their part.” 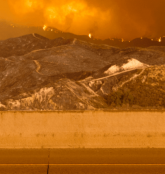 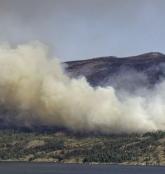