Initial reports from the Bahamas suggest that the islands of Great Abaco and Grand Bahama have been left devastated from Major Hurricane Dorian, evoking memories of the destruction on the eastern Caribbean island of Barbuda in the immediate aftermath of Hurricane Irma just two years ago.

A Record-Breaking Hurricane for the Bahamas and the Atlantic

Dorian maintained this intensity on September 1, and then made a series of landfalls – first across Great Abaco island, and on September 2 across Grand Bahama. In doing so, Dorian became the strongest hurricane in modern records to strike the northwestern Bahamas. As the Category 5 hurricane traversed the islands, its forward speed slowed and it became near stationary over Grand Bahama for roughly 36 hours before gradually moving northwest. Dorian’s eyewall subjected some areas of these islands to destructive wind gusts of up to 220 miles per hour (354 kilometers per hour) and catastrophic storm surge in excess of 20 feet (6 meters).

As the people that were still on the islands ventured outside into Dorian’s calm eye, we got our first glimpse of the extent of the devastation; and it was as catastrophic as we all had feared. Images shared on social media showed appalling wind and storm surge damage, with buildings razed to the ground and a large area inundated by several feet of water.

In a chilling update, the National Hurricane Center warned that most of the affected areas are likely to be uninhabitable for weeks or possibly months. The International Red Cross fears that around 13,000 homes – 45 percent of all homes on Grand Bahama and the Abacos have been severely damaged or destroyed, but the full extent of the damage may not be known for several days until the island can be reached by rescue missions and humanitarian aid.

There are seven confirmed fatalities but given the scale of the destruction that is being relayed, this number unfortunately is expected to rise as emergency responders reach those most impacted.

The images and footage coming from the northern Bahamas are reminiscent of the scenes from Barbuda following Hurricane Irma, which also made landfall as a Category 5 hurricane. Construction practices in Barbuda prioritized traditional architecture and features, rather than building codes and enforcement, and thus the island’s building stock could not withstand the 178 miles per hour wind speeds of Irma. Across Barbuda, with a population at the time of less than 2,000, an estimated 90 percent of properties were damaged or destroyed.

However, in contrast to Barbuda, the Bahamas is one of the Caribbean islands with a good record in terms of code provisions, enforcement, and construction quality. Buildings on the more populous islands of New Providence and Grand Bahama, which are home to around 85 percent of the nation’s ~390,000 residents, are predominantly constructed of masonry and reinforced concrete. Many have monolithic concrete or “Bermuda-style” roofs, which perform better than panel roofs and shingles. But with this in mind, how well prepared was the Bahamas for a hurricane of similar intensity?

Building code provisions rarely extend to withstand both the strong winds and their extended duration delivered by a hurricane such as Dorian. Freeport, located on Grand Bahama and home to more than 43,000 people, would be expected to perform relatively well in a lower intensity storm given its of building stock and construction, but the early indications are that the region has been significantly impacted with large areas under water and widespread damage, including the destruction of the Grand Bahama International Airport terminal.

Unfortunately, the situation is quite different on the Abaco Islands, where Dorian made its first Bahamas landfall. Here, wood frame construction is prevalent, which is more susceptible to damage in high intensity storms like Dorian, as seen by the images and footage of widespread devastation coming from the island.

Listen to this pilot, flying over Abaco in the Bahamas, listing what’s “gone” because of Hurricane Dorian pic.twitter.com/MwhAeiI8cl

With such a large area inundated by storm surge and wind gusts in excess of 200 miles per hour, the devastating impact of high waves on buildings should not be underestimated. Long duration surge events in locations with sandy soils such as the Bahamas can even destroy reinforced masonry and concrete structures through an erosion of the foundations, which leaves structures vulnerable to the elements despite withstanding the high winds.

The full extent of the damage and humanitarian impact in the northern Bahamas will become clearer in the days and weeks ahead, but we already know that Hurricane Dorian has left a significant impact on the island, and one that will be remembered for many years to come. 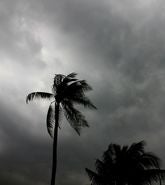 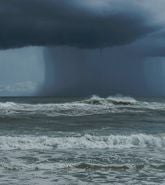